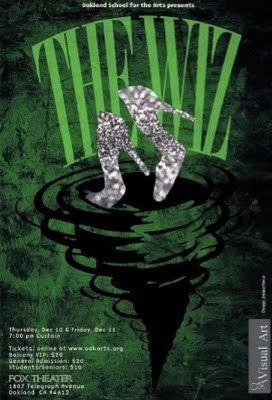 There are a number of worthy causes and organizations that flourish in Oakland.

Most deal with eradicating social perils that exist for non-disabled people. But imagine suffering from domestic or sexual violence in addition to not having full access to potentially lifesaving services.

DeafHopeis a nonprofit organization that is committed to providing support services for survivors of violence and their children. It provides a 24-hour hotline, advocacy, youth groups and training. A group of deaf women founded the organization to end domestic violence of all kinds.

DeafHope, in conjunction with the Oakland School for the Arts, will be hosting its “Ease on Down the Road” campaign, where more than 500 students will participate in a four-mile fundraising walk around Lake Merritt beginning at 10:30 a.m. Dec. 4. Proceeds from the walkathon will benefit DeafHope.

The following week, all are asked to support the school’s production of “The Wiz”— the first live musical featured at the newly renovated Oakland Fox Theater. “The Wiz”will run on Dec. 10 and 11. Tickets cost $30 for VIP, $20 for general admission and $10 for students and seniors. Group discounts are available. Tickets can be purchased at oakarts.tix.com.

The Oakland School for the Arts performance schedule is available at www.oakarts.org or by calling (510) 873-8808. For more information about DeafHope or to make a tax-deductible donation, visit www.deaf-hope.org.

Kevin L. Nichols is an author and the president/CEO of KLN Publishing, located in San Francisco. For more information, visit www.klnpublishing.com.
Posted by Unknown at 9:11 PM No comments: 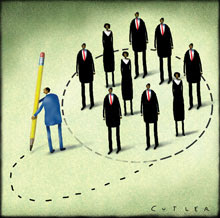 by Elizabeth Blackwell
The Rotarian -- December 2009

With the U.S. unemployment rate close to 10 percent and millions of those with jobs worried about the security of their paychecks, who you know can make the difference between landing a new job or remaining unemployed.

Networking is often misunderstood, conjuring up images of superficial, what-can-you-do-for-me conversations between strangers wearing name tags. But done right, it’s effective and satisfying – especially for those who shift their networking strategies to fit the times.

Surveys conducted by outplacement firms and human resources associations have shown that more jobs are found through personal connections than any other method. But it’s not just who you know – it’s who those people know. Groundbreaking research by Stanford University sociology professor Mark Granovetter has emphasized the importance of “weak ties”: Even if those in your immediate circle of friends and family don’t know of any job openings, when they tell their friends and co-workers – people you don’t know directly – about your search, your opportunities expand dramatically.

New technology has made it easier to track down and connect with those weak ties. The leading online business networking site, LinkedIn, allows members to link their profile to those of other members they know. Once a member confirms you as a contact, you can browse through that person’s connections. Link to 10 members, each with 10 contacts, and you have access to more than 100 potential job leads. You can also post professional recommendations and an online version of your résumé.

The economic downturn has had a dramatic effect on LinkedIn’s membership. Until last fall, about one million new members joined each month, says the site’s career expert, Krista Canfield. “Then, in August and September of 2008, we saw a shift in our growth rate – around the time many of the larger layoffs occurred and the media began talking about a recession in earnest. We’re now growing at a rate of one new LinkedIn member every second, or about a million new members every two weeks.”

Kevin Nichols, the moderator of LinkedIn’s Downtown San Francisco Networking Group and president of his own publishing company, says having an online presence shows prospective employers that you’re keeping up with the times. “It used to be that you’d get the heavyweight paper, print out your résumé, put it in the mail, and get a letter two weeks later acknowledging that it had been received,” he says. “Those days are gone. If you’re not willing to present yourself in an electronic way, employers will be concerned that you’re not going to be able to compete.”

Nichols has seen the benefit of online networking firsthand: When he had an idea for a book, he searched through his network for contacts at publishing companies. “Rather than dealing with the person who opens the mail and tosses it, I talked to the CEO,” he says. But it only worked because his intermediaries put in a good word for him. “You still need someone to vouch for you,” he notes.

That is the most critical aspect of networking: Whether it happens via e-mail or in a face-to-face meeting, it only works if there’s a personal connection. And that’s just what many of us find most difficult. “We know we should be doing it, but we’re not sure how to approach people we don’t know or know only slightly,” says communication expert Debra Fine, author of The Fine Art of Small Talk: How to Start a Conversation, Keep It Going, Build Networking Skills – and Leave a Positive Impression .

Fine, a member of the Rotary Club of Denver Southeast, Colo., says many job hunters make the mistake of coming on too strong. “It’s out of line to call someone and ask them to get you into a company,” she says. “It’s a horrible burden to put on them.” Instead, she suggests, phrase your question as a request for information rather than a job: “Who do you know who could help me find out more about this industry?”

Whether you’re networking at a business event or through e-mail exchanges, Fine cautions against “elevator speeches:” trapping your audience with a pushy, self-promoting monologue. “You should be prepared to answer in one sentence what you’re looking for, if asked,” she says. “It’s annoying when someone hands me a business card I didn’t ask for. What do you think I’m going to do with that card when I find it a week later in my pocket? Chances are I’m going to toss it.”

Perhaps the most important axiom is that networking is a two-way street. To borrow from John F. Kennedy: Ask not only what a new acquaintance can do for you, ask what you can do for that acquaintance. “It’s about value exchange,” says Myles Golden, president of Golden Career Strategies in Greenville, S.C., and a member of the Rotary Club of Greenville. “Genuine networking is showing a keen interest in someone else’s interests and endeavors. They will pay you back eventually.”

This approach requires a mental shift in how we think of networking. Rather than reaching out to others merely to achieve a specific short-term goal, we should constantly be adding to our circle of acquaintances, seeking out mentors, and sharing advice. Every Rotarian has access to a huge network of fellow members, but many don’t take full advantage of it. Fine, for example, makes a point of sitting with different people at every club meeting. She also drops by Rotary clubs in different cities whenever she takes a business trip.

With more than 5,700 members, Rotary International’s group on LinkedIn offers Rotarians another way to connect with each other. Primarily a place to ask and answer questions about Rotary-related programs and activities, it also features a job board, where members can post open positions or messages relating to their own job searches.

Golden, a past governor of District 7750, credits Rotary’s network with much of his professional success. As a young office-supply salesman, he found mentors in his Rotary club and eventually worked his way up to company president. Ten years ago, he started his own career coaching firm and now calls on his extensive network to help clients. “I just can’t imagine what my career would have been like without Rotary,” he says. “The best relationships I have are with my fellow Rotarians. They are many, and they run deep.”

Web sites such as Monster and CareerBuilder aren’t the only places to find job listings online. Try these sites to broaden your search:

Posted by Unknown at 8:48 PM No comments: