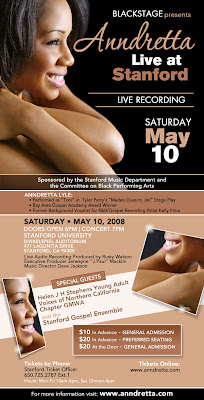 My fraternity brother, Kurt Hogan shot this snippet for a Barack Obama contest. Please vote if you like it. Thanks.

Letting Kujo out of the cage

By Kevin L. Nichols
Honest communication is arguably one of the most complicated components to a successful relationship. Honesty leads to trust. Trust in turn leads to mutual respect and commitment. Unfortunately, often times when singles mingle, honesty is as distant as the recently demoted planet, Pluto. The 14-minute short film Kujo, My Love was created to, among other things, inspire this form of expression. 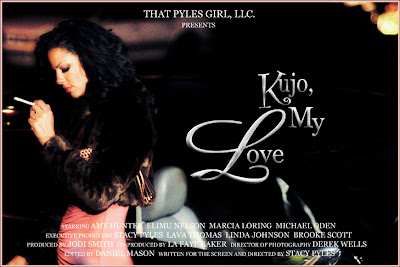 Kujo, My Love is a romantic comedy set in the fun-filled yet superficial world of Los Angeles, where everyone claims to be a celebrity, when in fact they’re not. This doesn’t stop Mallory, played by Amy Hunter, who wakes up after socializing and drinking at an art exhibition in the bed of a stranger named Jacob (played by Elimu Nelson). Mallory’s attempt to save face by departing unscathed ricochets when she cannot escape and has to face him and his evil cat named Kujo once again. This delightful tale illustrates two professional African Americans ultimately longing for the same thing: a simple loving relationship based on trust and acceptance.
Kujo, completed in January 2007, has already garnered many accolades, including invitations to the Cannes International Film Festival and the Hollywood Black Film Festival, at which it beat out 62 short films to snag first runner-up in the short film category.
The film was written and directed and produced by Stacy Pyles, who received her BA from UC Berkeley and her master’s in film from the California College of the Arts.
I sat down with Stacy to get her perspective on “letting Kujo out of the cage,” which is the last line of the film. “In layman’s terms, that means lay it ALL on the line. Your heart, your emotions, your fears, your hopes .... When you walk through the fire (as both Mallory and Jacob did) you come out a better person on the other side,” said Stacy.
Open communication is essential to any worthwhile relationship. Putting on a façade only postpones the inevitable. It would be more prudent to find out who you are dealing with in the beginning of a relationship rather than the end, so that you can save yourself a lot of time and heartache down the road.
We all have a cat named Kujo lurking somewhere. Some keep Kujo locked up, while others cradle him in their arms on their chest, right over their heart for the world to admire. What will you do with your Kujo?
Kujo, My Love will be airing on BET-J on the following dates and times:
• Sunday, April 27 at 2 and 8 p.m.
• Tuesday, April 29 at 8 p.m. and 1 a.m.
• Wednesday, April 30 at midnight • Sunday, May 4 at 2 p.m.
For more information, visit www.that-pyles-girl.com.
Kevin L. Nichols is an author and president/CEO of KLN Publishing in San Francisco.
For more information, visit http://klnpublishingllc.blogspot. com.

Copyright © 2008 The Globe Newspapers, Inc. All Rights Reserved
www.TheGlobeNewsPapers.com
Posted by Unknown at 10:51 AM No comments:

Stacy Pyles' film "Kujo, My Love" to air on BET-J (broadcast times below)

This is an excellent short by my good friend Stacy Pyles. You will recall that I did a press release for this at the SF Black Film Festival months ago. Please support. Thanks. 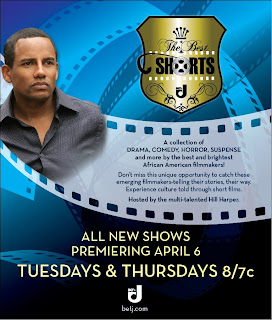 “Kujo, My Love” premieres THIS SUNDAY, April 20 at 8:00pm on BET-J as a part of their “Best Shorts Competition”. The series is hosted by Hill Harper.

“Kujo, My Love” will REPEAT on the following days:

The unconventional love story of Mallory who successfully sneaks out of a 'one-night-stand' but is mortified to learn she must go back inside to face HIM. And his evil cat named, KUJO

A charming romantic comedy about the possibilities of love, in a truly impossible situation, the film stars Amy Hunter (“This Christmas”) and Elimu Nelson (ABC’s “Private Practice”). “Kujo, My Love” saw its world premiere at the Cannes Film Festival (2007) and won the competitive Jury Award ‘Honorable Mention’ for Best Short Film at the 2007 Black Hollywood Film Festival (Beverly Hills, CA). To date “Kujo, My Love” has been an Official Selection at seventeen widely recognized film festivals around the globe, including the Toronto Film Festival, Los Angeles, Chicago, Harlem and San Francisco Film Festivals.


About Stacy Pyles:
Stacy Pyles is an award-winning Screenwriter/Director/Producer based in Los Angeles, CA. She owns and operates the film production company, That Pyles Girl, LLC. An alumna of the coveted Warner Bros. Writing Fellowship and Dr. Bill Cosby's sponsored Screenwriting Fellowship, Ms. Pyles has a M.F.A. in Film and is a member of the prestigious Alliance of Women Directors. She received a B.A. in Mass Communications and African American Studies from the University of California, at Berkeley and is represented by Bobbitt & Roberts, Attorney's at Law.


Thanks for your support!

See you at the movies!

The ripple effects of Cal Davis courtesy of The Globe Newspapers 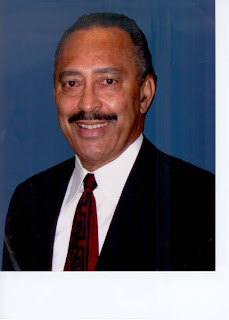 When God calls
one of His children back home, I often envision dropping
a pebble into a still pond to observe the ripples
that are created. Cal Deleanor Davis must have been
the equivalent of a boulder that was dropped from
a high altitude due to the size of the ripples caused
by his passing — ripples that will be felt
for quite some time.


Cal Davis was born on Nov. 4, 1940
in Tulsa, Oklahoma. Upon moving to Los Angeles, Cal played
basketball at and graduated from Manual Arts High School.
Thereafter, he joined the Air Force and served his country
throughout the world.

When Cal returned, he finished
his education at Cal State Los Angeles, earning a degree
in accounting and becoming a member of Kappa Alpha Psi.
He married Judie Martin in 1965 and moved to Oakland
to join Wilfong-Morris & Company, one of the largest
minorityowned CPA firms in the country. After several
name changes of the firm, Cal eventually became a partner
of Morris-Davis & Chan, and earned a master’s
degree in financial planning from Golden Gate University.

Cal was an entrepreneur and visionary.
One of his most important accomplishments was the creation
of the Judie Davis Bone Marrow Drive. When Judie was
diagnosed with leukemia in 1983, Cal developed a drive
to encourage people of color to register as potential
donors in the National Marrow Donor Registry. Sadly,
Judie died in 1990, but Cal continued his mission by
relentlessly targeting African Americans across the country
to register. According to the family, the number of African
Americans registered went from 124 in 1989 to 383,000
in 2001. Based upon Cal’s efforts, there were roughly
2.9 million African American registrants in 2006.

Along
with Cal’s national accomplishments, he was a member
of the Berkeley Alumni Chapter of Kappa Alpha Psi, the
Oakland Chapter of 100 Black Men Inc., and instrumental
in starting the San Francisco chapter of the National
Association of Black Accountants.

Although we will
no longer physically have Cal’s charisma, warmth
and compassion, his presence will be felt each time we
are confronted with one of his ripples.

Kevin L. Nichols
is an author and the president/CEO of KLN Publishing,
located in San Francisco. For more information, visit
http://klnpublishingllc.blogspot.com/.


Globe
Community Voices provides a forum for letters to
the editor. It is intended to give all members
of our readership an opportunity to voice opinions
regarding issues affecting their community.

When submitting a letter, please
include your name and community where you live or work.

Anonymous letters will not be published.

The letters published do not represent
opinions or positions held by The Globe Newspaper Group.

Thanks to all of you for your support. London is now a delegate to the Democratic National Convention! This nextworking thing might pay off after all . . . :-)

Kevin L. Nichols
Posted by Unknown at 9:28 AM No comments:

Pick up your local Globe Newspaper for a pleasant surprise . . . 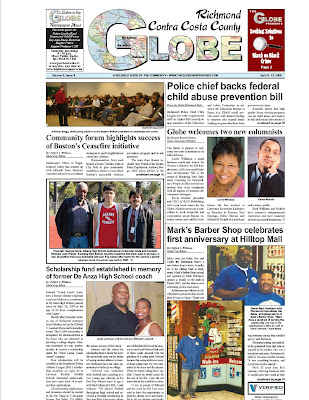 Kevin L. Nichols
Posted by Unknown at 11:21 AM No comments:

Vote for LONDON BREED as your OBAMA delegate!!! 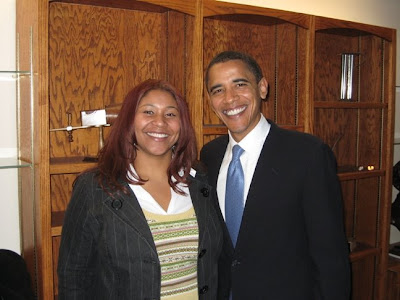 Photo taken in Springfield, IL immediately after Senator Obama announced his candidacy for President of the United States!

If you are a registered Democrat in the 8th Congressional District of Congresswoman Nancy Pelosi, I NEED YOUR SUPPORT THIS SUNDAY!

I am running to be one of only two women OBAMA delegates for the National Democratic Convention that will be held in Denver in August 2008 and I need your VOTE!

The California Democratic Party has put up a widget on their website where you can go to pre-register for the caucuses. All you have to do is go to www.cadem.org and look on the right-hand side -- then just fill in the blanks and follow the prompts. You can cut down on the long lines and help out the campaign volunteers who are staging these events by taking this simple step ahead of time. The deadline for pre-registration is Thursday, April 10th at 12:00 Noon.

You can only vote in one caucus and you MUST vote in the Congressional district where you are registered as a Democrat. Please plan to get to your caucus early so you have plenty of time to park and sign in. You must be in line by 3:00 p.m. in order to receive a ballot. WHY SHOULD YOU VOTE FOR LONDON BREEDI have been a supporter of Senator Obama since 2004 when he ran for the United States Senate in the State of Illinois. In February 2007, I attended his candidacy announcement for President of the United States in Springfield, IL with 17,000 supporters in ten degree weather! It truly was an amazing experience.
I have donated to the campaign, campaigned locally and encouraged others to support his candidacy. I have been inspired by Senator Obama's consistent message of hope centered around change in this Country. I truly believe that if Senator Obama is elected President, he will inspire Americans to play a major role in making this county a better place for all Americans.

Currently, I serve as the Executive Director of the African American Art & Culture Complex in San Francisco’s Western Addition community. I also serve as the Vice-President for the San Francisco Redevelopment Agency Commission and as a Delegate for the California State Democratic Central Committee.

Posted by Unknown at 2:20 PM No comments:

Please visit http://theglobenewspapers.com/#Headline for what you missed. Thanks.

Kevin L. Nichols
Posted by Unknown at 1:43 PM No comments: