I received word that Bay Area PR/Event Planning extraordinaire, Ave Montague, expired on Saturday. Once more information is obtained, I will modify this post. Thanks.

Ave Montague, an arts impresario and publicist who created the San Francisco Black Film Festival and was a vital force on the African American cultural scene, was found dead on Saturday in her apartment. She was 64.

According to the medical examiner's office, she died of natural causes related to cardiovascular disease.

Smart, passionate and relentlessly hard working, Ms. Montague was known for the persistence with which she promoted the arts organizations and causes she believed in. In addition to running the annual San Francisco Black Film Festival - an eight-day bash with films from around the world and tributes to African American artists like Billy Dee Williams, Melvin Van Peebles and Taraji P. Henson - Ms. Montague publicized many nonprofit groups over the years. They included the Lorraine Hansberry and Oakland Ensemble theaters, the Bay Area Black Journalists Association, the Omega Boys Club and the Museum of the African Diaspora (MoAD) .

"Until Ave came along, we had no black PR person who could get you coverage in major outlets," said veteran television journalist Belva Davis, who sat on the board of MoAD and other nonprofits Ms. Montague promoted. "She worked seven days a week. She was very creative and determined. Ave played a very important part in bringing these black projects and nonprofits to the attention of the public. She was extremely important to young filmmakers. She was a wonderful friend. There's not another like her."

Peter Fitzsimmons, director of the , was also saddened to hear of the death of Ms. Montague, who lived in the complex that houses the jazz center and the 1300 on Fillmore restaurant, which she also publicized.

"Ave was a mentor to many," said Fitzsimmons, who volunteered at the San Francisco Black Film Festival (whose board plans to continue Ms. Montague's work and put the festival on in June as planned). "She was a class act who was a major contributor to the cultural identity of the African American community."

Born in , , Ms. Montague attended before earning a marketing degree at the Fashion Institute of Technology in . She was accepted into the Macy's executive training program and was among the company's first African American senior managers. She worked as a group sales manager for Macy's and as a buyer for J. Magnin.

After moving to in the 1980s, Ms. Montague started her own public relations firm, representing artists and nonprofit groups like the United Negro College Fund and the Black Filmmakers Hall of Fame. Out of the latter came the San Francisco Black Film Festival, which Ms. Montague started in 1998 on a shoestring budget and built into a prime forum for African American filmmakers and for films from around the globe, including Africa, , and , that dealt with, as she put it, "a spectrum of subjects from socioeconomics to streetwise urban culture."

Ms. Montague received the Business Woman of the Year Award from the San Francisco Business and Professional Women's Club in 1994, and, with the late Faith Fancher, was a founding member of Friends of Faith, an organization that educates women about breast cancer.

She was always cooking up something, whether it was a charity fundraiser or the mail-order video business she started in 1989 to provide films by and about black people. Her last effort was the big Inaugural West celebration for President Obama that she co-produced at 's Metreon on Jan. 20. As usual, she packed the place.

Ms. Montague is survived by a son, Kali Ray, of , and two grandchildren.

A memorial service is being planned.

Come See Tommy Davidson and E. Clark at the Improv!

Please come and support my friend and fraternity brother, Erik Clark at the Improv.

One of most important day of our lives, was witnessed by thousands here in the Bay Area. Thousands gathered today at the Oracle Arena to witness the 56th Inauguration of the nation's 44th President, the Junior Senator of Illinois, Barack Hussein Obama.

Posted by Unknown at 4:13 PM No comments:

KLN
Posted by Unknown at 7:52 PM No comments:

This is taken from today's issue of XXLmag.com. 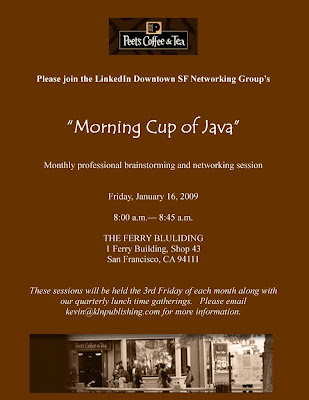 Ticket sales are $55 in advance or $65 at the door. There are a limited amount of Discounted Tickets for Seniors and Students. You must come to the AACSA to purchase tickets with special pricing.
Purchase Your Tickets Online! Go to www.sjaacsa.org/mlkluncheon.asp for more details.

Purchase an Individual Ticket - CLICK HERE to purchase your tickets

***Ticket sales are $55 in advance or $65 at the door. There are a limited amount of Discounted Tickets for Seniors and Students.
You must come to the AACSA to purchase tickets with special pricing.***

Features: The Martin Luther King Research and Education Institute of Stanford University will be displaying Dr. King's papers and other historical references.


Participate in the Celebration! You will find a variety of ways to support the Annual Martin Luther King Luncheon. You may participate by doing the following:

1. Be a Sponsor of the Annual Martin Luther King Luncheon - CLICK HERE for Sponsorship Packet

2. Purchase a Table or Be a Table Major - CLICK HERE for More Information

3. Be an Exhibitor or Vendor - CLICK HERE for More Information

4. Place an ad in our Program Guide - CLICK HERE for More Information

5. Purchase an Individual Ticket - CLICK HERE to purchase your tickets


As one of the AACSA’s primary fundraiser, your contribution to this year’s luncheon will sustain our annual Youth Programs. Some of the programs and services include: AACSA Leadership Academy, Summer Day Camp, Holiday Toys for Tots, and the Afterschool Literacy Program. Annually, the AACSA programs and services support nearly 40,000 people in the areas of social services, cultural awareness and education.


360 Minds Marketing Group is the premier
leader in Marketing and New Media and continues to
inspire growth and prosperity in the worlds of Entertainment, Non-Profit and Business.
Posted by Unknown at 12:29 PM No comments:

INAUGURATION WEST - Change is coming - "A New Birth of Freedom"

INAUGURATION WEST
Change is coming - "A New Birth of Freedom"

If you're not going to DC, San Francisco is the place to be!

Join Glass House Communications on January 20 at the Bay Area's Inauguration West, the West Coast celebration for the historic inauguration of our 44th President, Senator Barack Obama, taking place in San Francisco. The year's biggest celebration! Catch up with your fellow campaigners, supporters, and friends.


Mark your participation in this historic moment in time.
For more information and purchase of tix click here: http://inaugurationwest-iwghc.eventbrite.com

Posted by Unknown at 1:37 PM No comments:

A memorial service was held to celebrate the contributions and life of Dr. C. Diane Howell on January 15, 2009 at the Oakland Convention Center. Please visit the link below to see news coverage of the event.