Youssou N'Dour: I Bring What I Love is now playing in the Bay Area!

Please find some information that I received for your review. Please contact Anne below with inquiries.
Very truly yours,
KLN 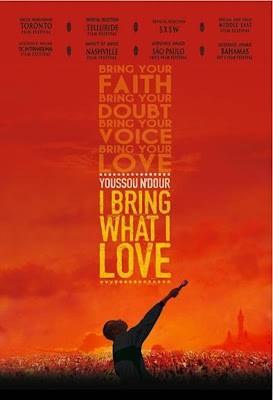 I work with Groovy Griot, a production company in New York and
we released a new film in the Bay Area on July 31 entitled,
"Youssou N'Dour: I Bring What I Love." The film is a documentary
about Senegalese music superstar, Youssou N'Dour. The film has
won numerous awards on the festival circuit and it opened in
New York and Los Angeles to much acclaim. The film is an entertaining, compelling documentary and it sends a message of positive change through music. Here's a link to a review of the film in the San Francisco Chronicle: http://www.sfgate.com/cgi-bin/article.cgi?f=/c/a/2009/07/31/MV35190UNA.DTL .

++++++++
It gives us great pleasure to announce that the new award winning film Youssou N’Dour: I BRING WHAT I LOVE opened in San Francisco (UA Stonestown Twin), Berkeley (Rialto Elmwood) and Monterey (Osio Cinema 6) on July 31 after opening to great success in New York and Los Angeles – “One of the best openings for a documentary so far this year" - Indiewire.

An audience sensation at film festivals worldwide, I BRING WHAT I LOVE takes you behind the scenes and into the world of Africa’s most famous musician: Youssou N’Dour. This never-before-told story follows N’Dour at a turning point in his life and career, as he releases his most personal and controversial album Egypt. But the singer’s hope for promoting a more tolerant face of Islam erupts in scandal and outrage in his native country that rejects the album and denounce it as blasphemous. Part explosive documentary, part stirring drama, I BRING WHAT I LOVE is an unforgettable musical journey with an artist whose courage and conviction shook the music industry and ultimately awakened the world. Watch the trailer: http://www.youtube.com/watch?v=ba49eFI3WsU

If you live in or near San Francisco, go see the film and bring your friends, family and colleagues. The film's beautiful footage, fun beats, and inspiring personal story make it a must-see.

Enjoy the tantalizing beats, be inspired by Youssou's compelling story, but also go see the film because there is more at stake. It’s all too rare that an African or Muslim subject gets this kind of filmmaking and this kind of attention. Amid the images in the U.S. media of African AIDS, war and poverty, this film is a chance for Americans to see a positive, realistic representation of contemporary Africa. In addition, it is all too rare that stories go below the surface and give nuanced views of a more tolerant Islam. Every film is judged by its box office receipts, so please do your part to make this film a success - to show theaters and the media that we want to see films that reveal an entirely new Africa.

For more information, questions, and to share your ideas please contact:
Anne Broecker
Groovy Griot
I Bring What I Love Outreach Manager
212-222-2336
anne@ibringwhatilove.com
Posted by Unknown at 8:49 AM